Well the one reflector that gave me trouble made me clean them up and try again. I had put PL on the butt cheeks where the relectors touched the ends. My plan was it would hold them while i worked on the hot glue step. I also cut them a hair short and hoped the PL would back the hot melt glue and prevent sag. I got PL everywhere sliding them in, trying not to get the stuffing in the PL. I'm thinking nobody will ever see this part, but the one that kept popping loose was bugging me.

Having never done that step, I scoured a lot of other build threads this week before I got back in the shop the last two days. I used a chisel to scrape any excess PL and poped the reflectors back out for some cleanup. I had hand ground the tubes, but since I needed some cleanup on the sides, I went for power tools. A quick buzz of 60grit sandpaper cleaned any PL strings and skins off the ends. I didn't want to mess up the nearly perfect sides that were cut on the table saw, so I decided to use my miter saw to bevel/clean all 8. I cut a 1-by with a 45 on the end and clamped it tight to my miter saw blade. With a stop block it was easy to re-skim all 8 half tubes. The ends were hand dressed with a belt sander,to get rid of any excess PL.

end view of the bevel


When I put them back in I just tacked them in in 3 or 4 places with hot melt to hold it while I worked my way around the joint. I did have a bit of droop through the end gaps. I filled one and it sagged a bit. So then I would drop a thin bead there to hold and let it cool while I worked my way around. Then I would come back with a fatter bead or twice with a similar sized to fill it with multiple passes. I tried several ways and the 3 pass seemed to work best. You'll see in my picture i had hot melt everywhere, even worse than i smeered PL. My wife's glue gun is for crafting and i'm not a fan.


I figured out a way to make it nice though. I took a heat gun, set to 500deg, just over the average hot glue gun melt temp, and re-flowed the joints that were too bumpy/sloppy. I was able to smooth them all out very nice. I probably could have made them perfectly level with some planning. IF I didn't have the gaps, it would have been a fairly easy task. As it was, it wasn't bad, only had to refill one or two sags and a couple low spots. Plus as a bonus, if you made more than one pass, the glue doesn't always melt in, so it leaves a some odd visual artifacts. I kepth thinking I was seeing holes, but it's the blobs on top of blobs if they were cold jointed. The heat gun would reheat enough of the top layer to soften the bottom one and join them. I had crystal clear beads when hot, and smooth even colored ones when cold.

I have my module backs routered out.
Hoping to start on the modules tomorrow or maybe the array jigs.

I have a question on pre-curving. How long do you pre-curve the backs? How much do you curve them?

I stacked all 4 up and put strap clamps around them. I curved them just a bit, the ends maybe an inch above flat. I left them like that for an hour, then bumped them another bit. My plan was to just nudge them more each hour or two and let them sit for a day. The picture is how they sit after the two adjustments today so far.

I haven't done them yet, but I envisioned doing each one separately with twine, tighter curve than where they're going. Much much more than that.

It's mentioned in the second paragraph on page 2.

The DR200 Plans wrote:...Bending it to a tight radius is easy if you cut the pieces to size, coil them up into a roll and tie them with twine, wire or wire ties. After a couple of days the ply "creeps" and stays in that shape. When it's time to install them it just takes hand pressure to position the pieces.

howiez wrote: ↑
Sun Nov 21, 2021 3:04 pm
I think I may pull out the poly fill i glued in the sheat beside the horn throat and re-do with foam carpet pad or something. I thought it was about 1" thick ( my wife loaned me some from her craft room), but it seems very thin/light now that's in place and I look at it again. I see carpet pad and such in the plans, and saw egg carton foam on someones build, any suggestions? 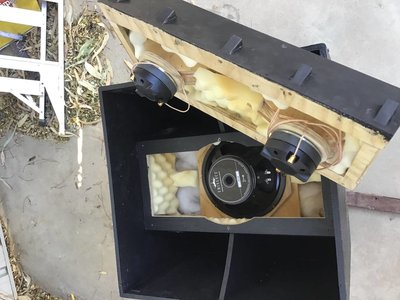 Poly fill in deep, mattress topper in the driver chamber
Build in process - 2 WH6, one Alpha 6a loaded, one PRV Audio 6MB250-NDY loaded

Ahaa! I see that now. I had planned mattress topper all along the sheath insides. Looks like I can just stuff her with poly fill and foam the front (driver chamber). That'll be easier.
DR200 build viewtopic.php?f=30&t=26094
THT build http://billfitzmaurice.info/forum/viewt ... 30&t=22020
CollegeTuba (TruckTuba) build http://billfitzmaurice.info/forum/viewt ... 30&t=23145
Top

In retrospect, I should have pre-curved only two panels. I realized today that I can only clamp one cab at a time becasuse I only have two strap clamps. And when I use them, I had to un-curl the other two panels. They held some curve, but not as much as i've seen in other pictures on here. At lunchtoday they were curved as seen in the picture attached. I cranked them a few more ratchets and let them sit til 4pm. Then a few more, and I glued them about 7pm.

They were a bit of a struggle to put in. My butt crack was wider to make it easier, but maybe too wide. the first panel stuck out a bit when removing the cleat to put on the second curve. I put a bit more PL in that area as I worked the second panel in, all buttered up where it would meet wood, and a bead between them. I had decent squeeze out all along except at the outside. Once I put my strap clamps on that, and a pair of bar clamps outside on a cleat, they pulled in nice. I used crown staples as my son rolled it around, and finished the end with a few screws ujntil we could get the cleat on. The second side wrapped easier, and we threw a cleat on ASAP, with the bar clamps. Then we strap clamped mid chamber on each and they evened out nice. I'm going to let them cure for probably more than 24 hours just to be safe. I'll try to get a picture of one clamped up tomorrow.
DR200 build viewtopic.php?f=30&t=26094
THT build http://billfitzmaurice.info/forum/viewt ... 30&t=22020
CollegeTuba (TruckTuba) build http://billfitzmaurice.info/forum/viewt ... 30&t=23145
Top

I forgot to mention earlier, using the heat gun to reflow the hot melt... genius! The difference in the photos is night and day. I gotta try to remember that little bit of trickery. Looks nice and uniform in the "after" pic.
Build in process - 2 WH6, one Alpha 6a loaded, one PRV Audio 6MB250-NDY loaded

I got cab 1 clamped up tonight but forgot to take a picture. This went much smoother now that I had the experience from it's mate. For sure I had PL everywhere, had about 6 staples miss in the middle back braces. I went back and pulled them out and PL's those holes. Had one area in middle braces where squeeze out was not 100% on both sides. I tooled a bit of PL in there just in case, although there was squeeze out on the opposite site. I used screws at the end cleat to pull the first panel on. Then bar clamps to hold opposite side while we fine tuned and put in staples.

On the other cab, I put a cleat on each panel, clamped to give a handle and they bent much easier. I put a bead of PL between the two backs where they meet, and my Son and I each dropped them in simultaneously this time. I pre-PL'd the cheeks and the crack. We each rolled part way, then i tacked a couple staples in to hold them down in the crack. Then each of us rolled our side around and used two bar clamps to hold them down. Then I worked crack to outside on each panel with the staples to get them tight wrapped. Last I threw the band clamps on the hold it all in or suck it down any last bit.

So here is cab 2 buttcheeks clamped from two days ago.

I'm picturing you two wrestling with them and envisioning it all being worth it... for the sound AND the memories.

Thanks for the update Howie

Some action shots, hoping to get back in the garage this weekend. Finally uploaded a picture of our second cheek clamp attemp. It worked much better/cleaner. And a picture of cab 2's cheeks after some touch up and nail pulling.

Cab 2 cheeks after some cleanup

I forgot to show this. I used my module backs as the stiffener while strap clamping the backs. Since I had it match drilled to the chamber, it made sense to just throw in some screws and snug it down.

Module back as a brace for glue-up

This morning I cleaned up the glue and nails on the backs, then routered the sides to clear the curved backs for glueing.

I appreciate you sharing this build. Those cabs are so difficult to build. You are the man for tackling them.

I appreciate you sharing this build. Those cabs are so difficult to build. You are the man for tackling them.

Thanks!
I was making great progress but i feel the curves have thrown me a curve and slowed me down!

I have the sides on each cab now. I have a lot of PL cleanup to do. I scraped inside as best I could after an hour or so. All those bits fell back in the curve. The should fall out fairly easy with a swipe of my hand, but I do have to clean out the outside seams. Those I did not scrape, as I had clamps all over. My original plan was 4 clamps per cab. The middle would not suck down all the way for some reason, even with 18ga 1-1/4" long pins thrown in every few inches. So I used 8 clamps and I even managed to glue one pad corner where it missed my was paper and PL oozed through.

Front view of the sdes glued on

Cheeky view of the sides glued on

I assume this little hole is for your speaker wires to pass through. It's not where I envisioned it passing through and I think I like the spot you chose more.