I've always love tinkering, and doing things a bit differently from every other guitarist out there. I used to run my rig in stereo through a pair of homebrew 4x8" cabs that sounded great... if I was standing directly in front of them. And of course, no one ELSE in the group could hear what I was playing (which may or may not have been a problem

). One day I stumbled down a random Alice-in-Wonderland-esque string of web links and found Mr. Fitzmaurice's XF guitar cab. His design discussion made a LOT of sense to me, so a couple of Eminence 12" Christmas presents later it was time to hit up Rockler for some baltic birch panels and get to cutting!

After some looking at the speakers I figured out I'd have to extend the depth a few inches to clear the really monstrous magnets and deep cone of the Eminence 12s. No problem, just add 3" here, here, and oh there too. The sides, back, and top and bottom were pretty straightforward; getting the compound angles for the baffle boards setup and cut right on the table saw... well, not so much. I had bought what I thought was sufficient excess plywood to cover the XF212 and another project I had in the wings; as it was, I botched THREE, count 'em THREE, sets of baffles. Kept putting the bevels on the wrong edges or facing the wrong way, and had the center of the cabinet measured and marked wrong for the set I thought I had right.

Since another 2 hour drive to Orlando was not in the cards the baffles ended up on shop birch 1/2" from Lowe's. 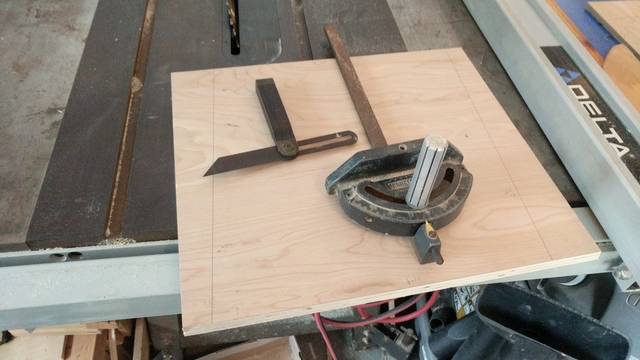 My relief was enormous when I finally had a test fit that worked. The fit wasn't surgically precise, but the PL glue would doubtless a multitude of sins when it was time to glue 'em in. Got the speaker holes measured, marked, and cut out with the trusty Bosch jigsaw, the glue gun was brought out, and it all went together very nicely. 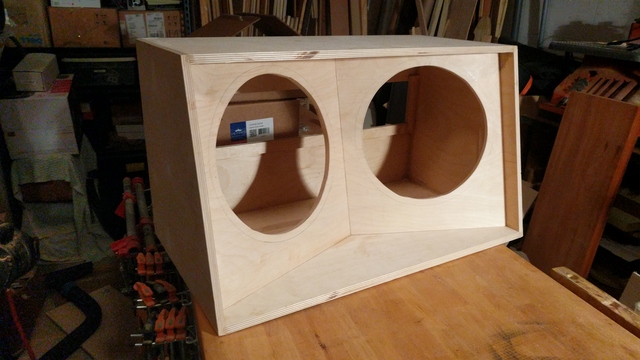 I've never been a fan of the single strap handle on top of the case approach; it makes for a wobbly "sit" if you put an amp or laptop or other stuff on top of the cab. My go-to is those spring loaded flip out handles in the sides. They install inset into the sides, so I cut clearance holes... 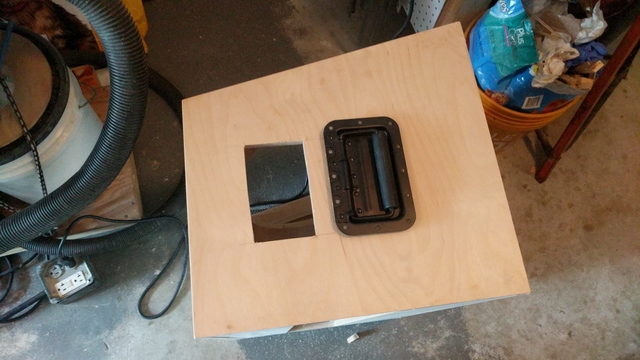 ...and then patched 'em on the inside to ensure airtightness if I decided to run the cab sealed in the future. 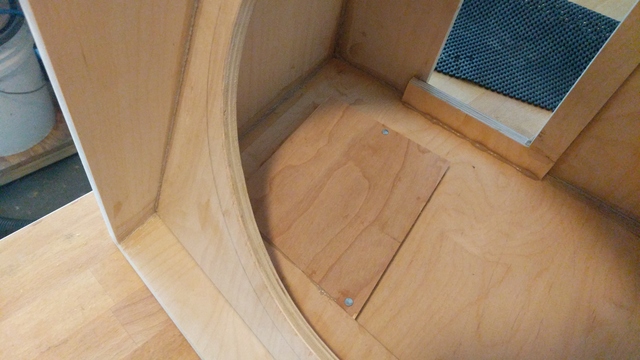 It was pretty quick work to make the mounting blocks for the grille, then it was time to mask the living daylights out of it and head for the great outdoors with the rattlecans. The idea was to paint everything behind the grille black, and then hit the rest of the cabinet with a bunch of coats of Watco Danish Oil. I was looking for a look like the old Legend guitar amps from the 1980s, which I remembered with a certain fondness. 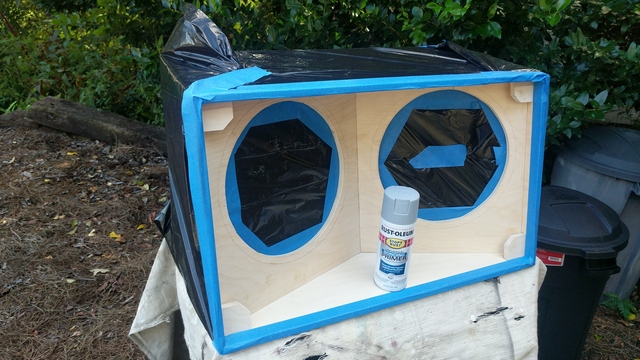 Once I got the baffle area primed and painted, I applied about a dozen coats of the Watco Danish Oil. Once the final coat was on, I pulled a stunt I've done on several previous projects and speed-cured the stuff by baking each side for a couple days under a murderously hot halogen work lamp. Works great! 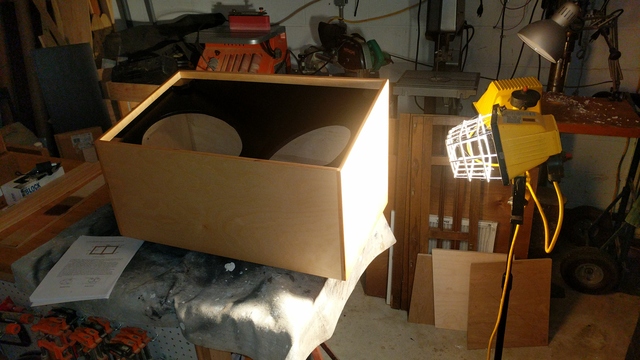 Finish cured, speakers mounted, jacks installed on the back (it's wired for stereo - each channel of my amp drives one speaker). I've yet to have the time to put the grille together. 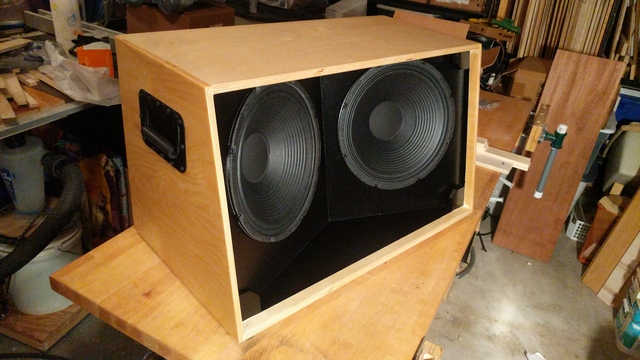 Off to church with it.

My decrepit (and empty!) old Ampeg V4 cab sitting on the floor behind the stage riser gets the cab up to a perfect height. One mic in what I found to be the "sweet spot" between the speakers gets me into the PA just fine. The sound with the 2 12s is beyond amazing - much deeper lows and much less directional than the 2x4x8" was.

I can walk all over the stage and even off the side to the piano and still hear what I'm doing, which is great. This thing really works well. Major props to Bill F. for his design! 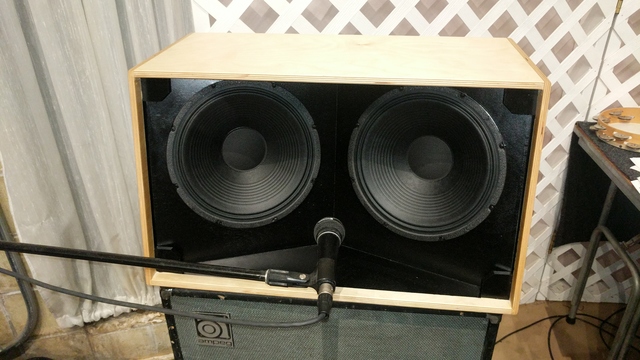 I stumbled into this site the same way as you. I was looking for a cab to build similar to the Sunn angled bass cabs or Fender pyramid cabs. Sold my 4x12 cab soon after build the XF212. Then gave it to a friend who put some old Jensens from an organ in it and he loves it. He wrapped it in tweed to match his Carvin head.

Like most here, I drank the kool-aid and now have more cabs and equipment than room. Don't buy the CD of plans or you'll wanna build all the models.

Thanks for sharing! That's a good-looking cab you got there.
TomS
Top
Post Reply
3 posts • Page 1 of 1